It’s hitting the handbag – Technovation’s BeautyBank is an absolute essential; it combines two of lives greatest necessities; a compact mirror and power.

The diverse range of products all have one thing in common; connectivity. The gadgets play on our heightened senses of sound, sight and touch and ultimately integrate so closely into our everyday lives making for an excellent promotional product.

Now it’s just about keeping them charged. Find out how to not only meet the promo brief, but the power brief.

As the hype around wearable technology reaches fever pitch we find the leader of the pack is still the Activity Tracker, these devices are fast becoming those we cannot live without. It’s the combination of functionality and fashion that’s keeping activity trackers in vogue and landing wearable tech on mainstream consumer shopping lists.

Being affordable and functional is key in the promo industry and that’s where the I’mFit Activity Tracker comes into its own with its blend of smartwatch, fitness tracking and sleep monitor tech. Helped further with a great range of coloured strap options.

With shipments of wearable sports / activity tracking devices worldwide forecast to total 57.5 million units in 2015 it certainly looks like wearable tech is following a similar road to riches as smartphones and tablets. 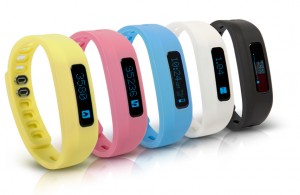 <Back to Tech Talk